Skip to content
The 10,000 billion VND port in Long An was put into operation

Long An International Port with a total investment of nearly VND 10,000 billion has been in operation for phase 1 and phase 2 on the morning of September 26.

Located in Can Giuoc district, Long An International Port is located on Soai Rap river channel, right upstream of Dong Nai river, 20km from the mouth of the East Sea, and 38-40 km from the center of Ho Chi Minh City by Highway 50. .

The port has a total area of ​​147 hectares, a water area of ​​2.6 km, invested by Dong Tam Group in 3 phases, including 7 berths, 7 barge berths capable of receiving ships up to 70,000. DWT. Along with that are ancillary works such as warehouse systems, bonded warehouses, container yards …

Currently, phase 1 of the port has been completed, with 3 berths of 630 m in length. By the end of 2019, in the process of both construction and operation, the port has welcomed nearly 1,000 domestic and foreign ships, reaching nearly one million tons of import and export goods. This port also has many ships with capacity of 50,000 DWT. 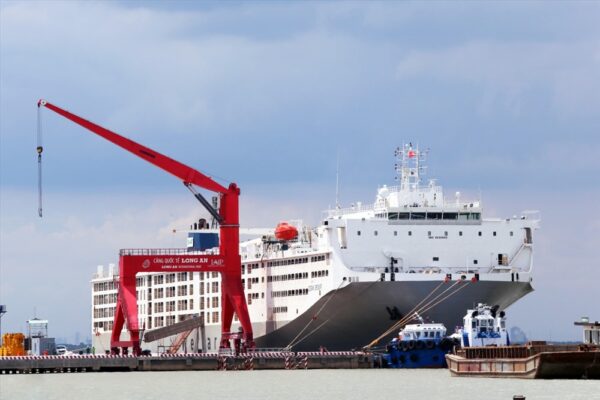 A corner of Long An International Port in the morning of September 26. Photo: Telecommunication

Phase II of the project will build berths No. 6 and 7, accommodating ships up to 70,000 DWT. At the same time, the investor said that they will continue to build berths No. 4 and No. 5 this year and the goal is to put into operation soon in 2021.

The No. 8 and 9 berths are also being promoted to expand their scale to accommodate ships with a tonnage of 100,000 DWT, bringing the total continuous length of the wharf system to 2,368 m, becoming one of the international berths. has the largest port length in Vietnam, with a customs clearance capacity of about 80 million tons per year.

Mr. Tran Van Can, Chairman of Long An province, evaluated that putting into operation Long An International Port plays an important role in the local economy, “in order to prepare infrastructure to increase opportunities to attract investment. High quality FDI inflows into Long An in the post-Covid-19 era “.

Long An has 32 industrial parks in the planning of industrial projects in Vietnam. In which, 16 industrial zones have been put into operation with the occupancy rate of 87%. Mr. Vo Quoc Thang, Chairman of the Board of Directors of Dong Tam Group, evaluated Long An International Port as the premise to promote the development of industrial zones and clusters, contributing to economic development in the Mekong Delta. Long, at the same time reducing road traffic congestion, reducing transportation and logistics costs. He said he would continue to invest more in this province in the coming time.

Solution consulting
FREE
100%
We call you back